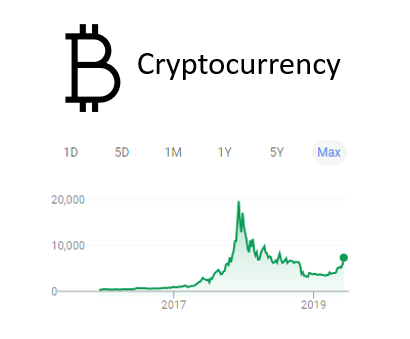 Few countries strictly ban the usage of Cryptocurrency and US impose a capital gain tax for the cryptocurrency. In the United States, the crypto exchanges (traders) are supposed to report the transactions to the IRS. Currently, the value of bitcoin is ~$8000. See the above Graph for the trend (in US Dollars).

Anything new takes time for everyone to get used to it and the authorities to impose controls. The same applies to the cryptocurrencies. Currently, the controls are not strict, it is hard for the authorities to control and many countries are not concerned about bitcoins, most of the transactions (cryptocurrency to money) happen in those countries.

So, apart from the new admirers (investors), who use the cryptocurrency? Mostly all of the darknet transactions occur in cryptocurrencies. Not only that, but these are also used in ransomware and data breach demands. A friend of mine who owns a small law firm; years ago, three of their computers got locked by ransomware, and they ended up paying bitcoins worth of ~$10,000 to retrieve their data. They even reached out to law enforcement at that time, but due to the complexity (the demand was to pay by bitcoin through darknet; which is not traceable). This is just an example; in real life, this is how the cryptocurrencies are used!

Think about it, when you use a credit card or mobile payments, you are not carrying the currency, it is digital. Also, those encryptions are secure as well. Then, what is the difference? The banking architecture controls the regular digital money, whereas the cryptocurrency is not. So, it is easy for people who conduct illegal activities to monetize without getting caught. What do you think?

July 01, 2011
I'm in a bus and on my way to Delaware. There are different kind of people who travel along with me. I can see happiness in some faces, tiredness in few faces and some don't have any kind of expression looks like they are in balanced state. My neighbor is in deep sleep. I started starring outside. Everywhere it's green and green:) my heart starts saying HELLO to the trees which passes by. There is a tree in the middle, it's the tallest among all the trees. But but... It is dying.. All the leaves are faded.. Yes, it's in her last days. My heart stopped there and started talking to this tree. This tree lives here for few centuries. My heart tries to read her thoughts. It seems to be in a very balanced state. My heart starts asking several questions. Anton : Hey you looks so amazing. You are the tallest one among your friends! Tree : Ha ha ha! Anton : Excuse me! Why are you laughing? Tree. : I know the truth. I only have few hours or few days! Anton :
6 comments
Read more
Follow @Anton_Thavo